Well, last Friday was exciting. I was running the Skywarn net during the storms that day and at 8:28 PM I heard a loud snap and then a crash - and then no power. I did NOT know how bad it was at the time.

I grabbed a nearby HT and announced to the net that I was temporarily off the air due to lack of power. I then dashed off to find my temporary battery (moved because I was using it to power the now dead repeater controller from 147.27). I got back on the air and worked some more of the net until about 9:00 and then turned it over to Marty, KC8NOV so I could go out and take a look at what really happened.

What I found was amazing. It was of course dark by now and the storms had pretty much passed. Unfortunately I didn't think of taking photos at that time so I missed some stuff.

The Cause of it All

The cause of all the difficulties was a cherry tree in my neighbor's back yard that snapped off about 20-30 feet up the trunk (about 2 feet in diameter there) that fell across the utility lines that run along the back property line. These photos were taken the morning of the 14th. 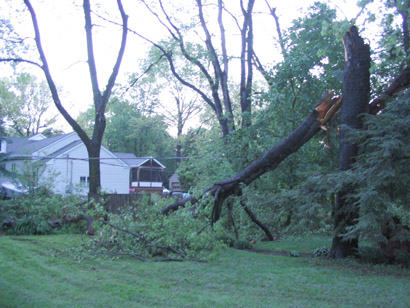 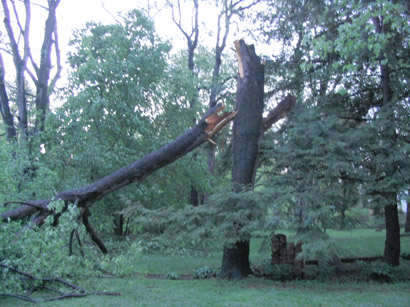 The trunk is actually split down the middle for about two thirds of the way down from the break.

What runs across the back property line is a single high voltage feed line (right to left) to a transformer two poles to the left (west). Below that is the 240 volt feeds to a group of 8 or 10 houses. Next down is cable TV. I hadn't looked for some time but there seems to be 7 or 8 of the aluminium hard line feeders in the bundle. Why more than 1 or 2? Next down is a phone cable. I don't know for sure (but I'd like to find out) but I think this is probably a 50 pair cable.

The tree took out the high voltage line and yanked pretty hard on all the rest. So hard in fact that the pole that is about in the middle of my back yard was snapped off in the middle (where the 240 volt lines attached). This also yanked the entry service off the side of my house. In the photo below Ohio Edison has already reattached the service to the house end. I did get an electrician to come out Saturday and put the meter and "mast" back up so I could get power back as soon as possible. 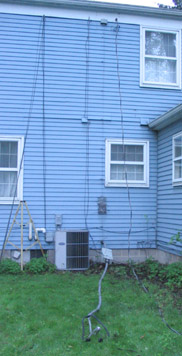 Since I didn't think of photos sooner I didn't get a photo of the broken pole. Here is what is left though - with the cable TV stuff still attached. 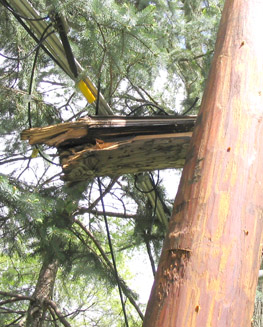 I have to say I was impressed with the response of Ohio Edison. They were out around 3 AM with a tree crew (private contractor). I was hoping for a bit more sleep that night but it was not to be. By 3:30 I was up and took a walk out to see how it was going. They had the tree cleared and had hacked down what was left of the old pole and had it cut up into transportable size pieces.

They brought in a Bobcat with an augger and drilled the new hole next to the old one. They then switched the Bobcat attachment to this claw thing and picked up the new pole, raised it over the Bobcat and brought it to the back yard. They set it in the hole and packed dirt around it and took off to find breakfast. Here's a photo taken later in the day (when it was light out): 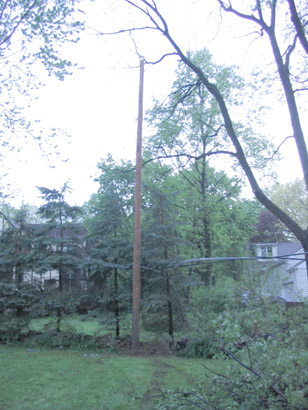 I figure it's about time to fire up the generator and get the refrigerator running. Wheeled it out of the garage and ran the 50 foot extension cord (number 12) to the fridge and got it going. This is the first time I really used it for an emergency situation and it performed quite nicely. 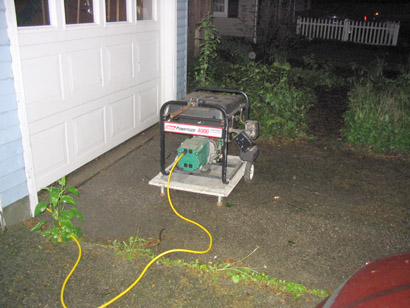 By 10 AM Ohio Edison had the power all back on. Pretty good considering the extent of the damage.

When things got light out it was easier to see some of the problems. The telephone tap off near the pole with several attached phone drops (including mine) was laying on the ground: 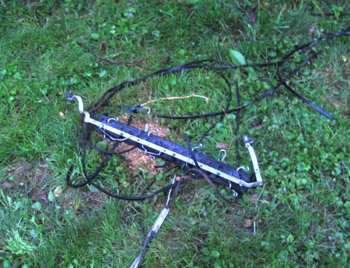 SBC didn't fare as well for promptness. The first guy showed up about 10 AM and said something like "Oh my!" (no doubt thinking something much stronger). He was taken by surprise - which should not have happened. I made a point of calling SBC a second time Friday night after I saw the extent of the damage. I was very clear about how serious it was. The guy taking the report obviously didn't care.

The guys from SBC did do their best to get things patched up temporarily though. By the time Cathy and I got back from Mansfield after midnight we had a dial tone, but no DSL. Too late to try and guess why so I went to bed for much needed sleep.

By the morning my subconscious had planted a suspicion and I tested it. I picked up the phone and called my cell phone and ... it wasn't my phone number. No wonder no DSL, they had the wires hooked up wrong. They did show up Sunday morning and started getting it straightened out. It's still a very temporary "patch" job: 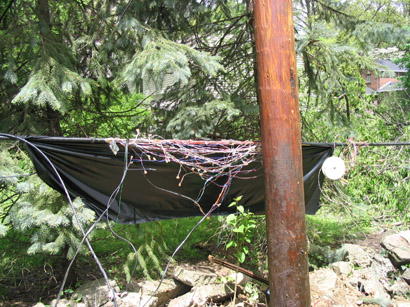 You'll notice this is only about 3 or 4 feet off the ground and just covered up with a piece of plastic (when it's covered). My drop and others are still just lying on the ground but it works.

The reason they're leaving it this way is that they plan to replace the 900 feet of cable down the line. It has something like 25 or 30 places where it has been opened up and either tested or patched. It's long overdue for replacement and it's supposed to get it sometime this week.

That's all for now. I may have a couple of more photos to add later as things get "finished" up.

It actually took over 2 weeks for SBC to finish the job. They ended up replacing about 1500 feet of cable and it took quite a while to get it in and put new hangers on all the poles involved. And guess what? When they switched over to the new cable they botched which line I was again. Fortunately I was right there this time and as soon as they told me it was ready I tested it - and told them it was the wrong line. They did get it straightened out pretty quick though and my alerting them of the problem probably avoided them making several other misconnects.

It wasn't until May 31 that the crews came in to clean up the offending tree remains. They did this from the property behind my neighbor with a crane from OVER TOP OF the utility lines. They had to remove a perfectly good walnut tree from that property to accomplish this too. I'm not sure if this was a voluntary removal or forced on the homeowner there but I'm sure the wood from the walnut tree was worth quite a bit. I hope they were suitably compensated. They got the part of the tree from above the break over the utility lines before I got any photos so I don't have anything of that but here's where they were cutting down the part below the break: 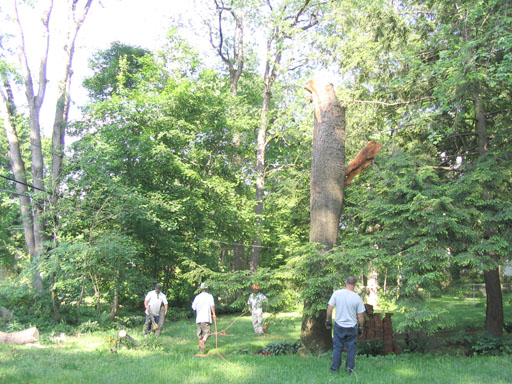 It was quite an operation as the chain saw they brought wasn't really big enough to do the job and it took some doing to make sure it fell the right way too. Once it was down they cut it in half and hoisted the two parts over the utility lines: 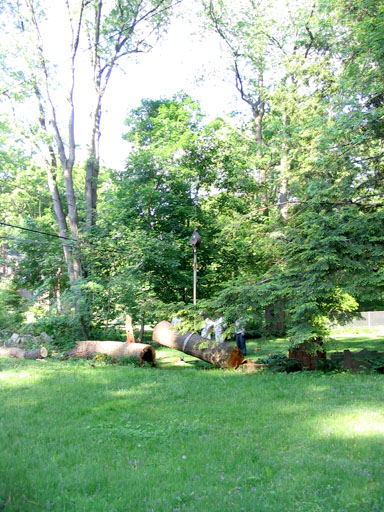 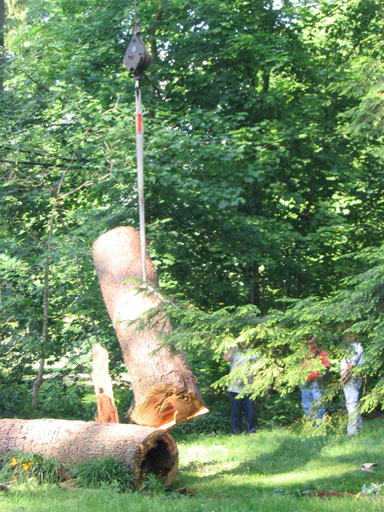 From the above photo you can see how hollow the thing was pretty clearly.

Here's a good photo of the crane in operation.  The new pole appears just to the left of the crane boom. Some of the walnut tree trunk is still standing appearing just below the log section the crane is lifting. 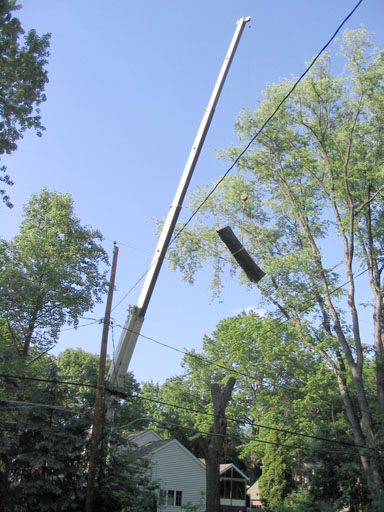